MANDAMUS: VOID Orders/Judgments is a law blog from Paul Chen, a real-estate guy who’s discovered one weird trick to make the legal system bend to his will. Judges HATE him! 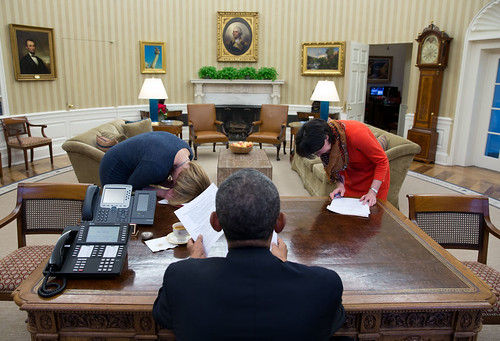 “This is one of those photographs that needs some explanation. The President had been meeting with Communications Director Jennifer Palmieri, left, and Senior Communications Advisor Tara McGuinness, to prep for a radio interview. At one point, the President made a comment so humorous that Jenn and Tara bent over in laughter.” (Official White House Photo by Pete Souza)

WHY WON’T THE WHITE HOUSE REVEAL WHAT THE JOKE WAS?!?

Want to watch some strangers on the Internet play video games, but worried they might say something mildly upsetting? Fear not! Game Grumps Triggers will let you know when to cover your eyes and ears!

Awful Link of the Day: The Bad Boys of Pleasure Island

The Bad Boys of Pleasure Island (not safe for work!) is an up-and-coming Tumblr blog that expands and updates the mythos of Disney’s Pinocchio for a new generation. Remember the part when Pinocchio and all his rowdy friends go to Paradise Island and (spoiler) get turned into donkeys? Well, given that you’re using the Internet to read this, you shouldn’t be the least bit surprised to learn that it’s been warped into a weird sex thing. Of course it has.

Did some housekeeping around the site. Notably, the Video section is back, thanks mostly to me getting my YouTube account back.

This page (warning: autoplay) is now the best place to experience my Obama/Hillary shipper video, which doesn’t feel dated at all. Sorry about the Google ads, you have to be very careful if you try to dismiss them or else it will open YouTube in a new tab/window and the sync will be RUINED. ***ITEM!!!*** Leaked e-mails from the Sony Pictures hack reveal plans for a new movie about the blue alien guy from the Walkman commercials!!!!!!!

@andybugay sorry, thought it was a temporary thing. looks like the zits teen is also getting a new outfit… big changes in the funny pages

@robbercat oh dear god. next thing you know the Baby Blues mom will be pregnant again

@robbercat the baby grew up and became another Cathy. now read the strip over from the beginning

New Awful Link of the Day up, this time about the subreddit /r/SocialEngineering:

/r/SocialEngineering is a subreddit “dedicated to the art & science of human manipulation & social hacking.” In other words, it’s full of Machiavellian miscreants who treat every interpersonal interaction as a mind game that you can “win” by applying the appropriate psychological cheat code!

This probably sounds like a dumb humblebrag, but it looks like my story about Marge Simpson having rabbit ears is making the rounds on Reddit again. This has already used up half the website’s monthly allotted traffic, so unless it tapers off it might go down at some point. Consider it a Christmas vacation, maybe?

Awful Link of the Day: Crypto-Comics

Crypto-Comics is not so much a webcomic as a cynical experiment to see how little effort can be put into one. It takes stick figures from Cyanide and Happiness and slaps a large circle with the Bitcoin logo over them. Everything else appears to have been made in Microsoft Word with the shape creation tool.