The Simpsons Is Ending

In a highly unexpected move, The Simpsons is ending... its business relationship with comiXology.

Bongo Comics Group, the publisher of Simpsons Comics, quietly took all their stuff off comiXology, the leading digital comics retailer owned by Amazon. Nobody seems to know what led to this decision, and both sides are remaining tight-lipped about it. Here's what they told Tom Spurgeon of The Comics Reporter:

Chip Mosher of comiXology told CR, simply, "Bongo is no longer available on comiXology." Susan Grode a partner at Katten Muchin Rosenman LLP, speaking on behalf of Bongo, said, "Thank you for your email. My client has no response regarding Comixology. Bongo has created the Simpsons Store app for its comics and trade books on iTunes, to be released shortly."

It's hard to say what's a stupider name, comiXology or Simpsons Store.

Spurgeon says he was also told users who previously bought Bongo comics on comiXology will still be able to read their books, because that's apparently a thing you have to worry about in the digital marketplace.

Bongo making their own app is a bold move for a company that didn't even have a website until 2010. Grode's terse statement does raise some concerns, though: she only mentions iTunes, with no mention of whether Simpsons Store will be available on Android, Windows Phone, or the web, like comiXology is. Also, calling it Simpsons Store (ok, maybe it's a placeholder name?) leaves the digital fates of Bongo's non-Simpsons output, like Futurama Comics and SpongeBob Comics, unclear. Because, come on, buying a SpongeBob comic from a Simpsons app would just be madness.

Ideally, the service would be under the Bongo name, and I'd love to see them digitally re-release stuff from their defunct Zongo Comics imprint, the underappreciated Heroes Anonymous, and maybe some uncollected Life in Hell stuff. Bongo Comics, makers of fine Simpsons comics and distributor of SpongeBob comics, is branching out again with Mylo Xyloto (get it, like xylophone??), a six-issue comic book miniseries thunk up and co-written by the band Coldplay. What's it about? Judging from the book's cover, it's about some TRON-like cyberbabe who can emit magic beams from her fingers or something. I guess this is the band's attempt at doing their own Yellow Submarine? (FUN FACT: A few Bongo Comics people were working on an adaptation of Yellow Submarine but it got abandoned.) Or perhaps this whole "making music and becoming really famous" thing was just Phase 1 of an elaborate scheme for Chris Martin to achieve his true calling, making comic books. Hmm!

Here's how co-collaborator Mark Osbourne (probably the guy doing most of the actual work) describes it:


The comic is the latest expression of a music-driven feature animated film that the band and I started developing several years ago. It is the story of Mylo Xyloto, a young Silencer on the front lines of a war against sound and color in the world of Silencia. Mylo discovers that the enemy he's been trained to hate his whole life might not be the enemy after all.

Blah blah blah, etc. Look, if a band is making a comic book and they're not putting their blood in the ink, then I don't give a hoot.

Radioactive Man Collection Coming Up and At Them in July

CORRECTION: An earlier version of this post's headline mistakenly said "atom" instead of "at them." IN THE NEWS regrets the error.

The most critically underrated component of the enormous Simpsons media empire is the Radioactive Man spin-off comic book series occasionally put out by creator Matt Groening's Bongo Comics, which after 18 years is finally being collected in a deluxe hardcover anthology.

First, a little backstory. The premise of Radioactive Man is simple but ingenious: each issue was purported to be a random issue from the fictional comic book series' nearly 50-history, satirizing different comic book eras (Golden Age, Silver Age, etc.) and all the superhero conventions and gimmicks that come with it. There was initially a six-issue run in 1994, starting with #1 (mostly consistent with what we saw of it in the Simpsons episode "Three Men and a Comic Book") and ending with a Spawn-tastic #1000, followed by an "80 page colossal" the following year. A second run debuted in 2000, this time written by the remarkable Batton Lash, with a noticeable improvement in the artwork. Each issue also featured faux ads from the Simpsons universe and letters from readers playing along with the joke (however, the letters in the second series were all fictional; i.e. #222 features a letter from a young Marge Bouvier). Everyone at Bongo is a giant comics nerd (the first issue of Simpsons Comics is a Fantastic Four reference, for example) and Radioactive Man really let them go hog-wild, sort of like how The Critic allowed Simpsons writers Al Jean and Mike Reiss do all the movie parodies they wanted.

Bongo Comics Redesigns, For Some Reason

Bongo Comics, the comics distribution arm of the vast Matt Groening media empire, is apparently redesigning most of its logos to be blander and textier, for inexplicable reasons. Take a gander:

Marginal Talent Given Own Comic Book

Bongo's Bongoiest artist Sergio Aragonés, best known for his eye-straining cartoons in the margins of Mad magazine, has been given his own monthly comic book, Sergio Aragonés Funnies. Mad went quarterly two years ago, so obviously Aragonés has been left with a surplus of comics he needs to unload, and Bongo Comics has generously agreed to pick up the slack.

Simpsons Illustrated was an official Simpsons magazine that went on for 10 issues in the early 1990s. Each issue featured exclusive Simpsons comics, news, and pictures of people who worked on the show (Disclosure: the header and title of IN THE NEWS is an, er, homage to this magazine). It was the forerunner to Bongo Comics Group and the Simpsons Comics series.

In 1992, they did a special 3-D issue featuring a barbecue-themed comic with an interesting moment: Yes, Lisa requested a vegetarian alternative three years before becoming a vegetarian in the 1995 episode "Lisa the Vegetarian."

Was this quick moment merely an indication of Lisa's multiculturalism and non-conformist personality? Was her character so predictable that it was assumed she'd eventually turn vegetarian? Was it simply to set up the use of a long prop, in this case a shish kebab, in order to take advantage of the 3-D gimmick? Or, more likely, did the writer of the comic have access to Simpsons episodes from the future, thus allowing him or her to retro-plagiarize "Vegetarian" writer David X. Cohen?

You can read the whole issue over at the astoundingly comprehensive Spanish Simpsons Comics blog Tebeos de los Simpsons, including an early comic version of the Hey Arnold! pilot.

Bart Simpson has had his fair share of enemies of over the years. Nelson Muntz. Principal Skinner. Sideshow Bob. The country of Australia. Space Mutants. But these formidable foes have been mere child's play compared to the deadliest enemy of all: the gender binary.

The Simpsons, of course, is no stranger to controversy. But in recent decades, the show's penchant for edginess has fallen by the wayside. And so it has fallen upon Simpsons Comics, the show's funnybook corporate sister, to pick up the gauntlet of provocative social commentary. From the looks of things, it appears the Bongo Comics creative team has risen to the occasion with this - dare I say - daring premise for an issue currently available in stores:

Bart becomes an Internet sensation after being filmed while donning a wig and performing for his friends at Springfield Elementary. Little does he know it will all lead to fame, fortune, and the all-you-can-eat backstage buffet as he becomes the new (female?) pop diva sensation...Torie Missouri!

Yes, that's right. Bart Simpson is being enlisted to fight in the war against Gender. Bongo Comics, the independent comic book company owned by Matt Groening, has finally joined the 1990s and will launch a website tomorrow, which will feature news items, blog posts, and, most amazing of all, a list of "all Matt Groening's comic-book, trade-book, and calendar publications." Bongo, which publishes Simpsons, Futurama, and NewsRadio comics, has owned the domain www.bongocomics.com since 1996 but until now only used it for e-mail purposes.

Still no word on the long-dormant MattGroening.com, which has been "under construction" since 2000. [The Beat]

NOTE: This manga review is courtesy of our news partner, AnimeJihad. 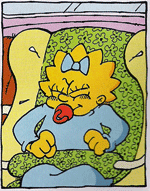 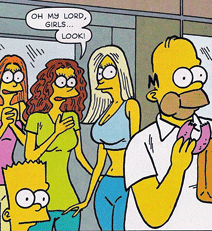 Bongo Comics has outsourced yet another job that could have gone to a hard-working American cartoonist to some Mexican immigrant named Sergio Aragones. [The Beat]

Lawyers for 20th Century Fox take copyright infringement of The Simpsons very seriously. During the early 1990s, lawyers were sent to vendors who sold bootleg Bart Simpson t-shirts. Towards the end of the decade, many Simpsons sites received cease & desist orders for the grave crime of hosting framegrabs. More recently, Fox lawyers managed to take down a series of Simpsons video parodies featuring OJ Simpson. Even creator Matt Groening, who has a collection of bootleg Simpsons merchandise, personally dispatches lawyers from time to time.

Ben Jones, an artist in the art collective Paper Rad, has recieved many acclaims for his work; Paper Rad's avant-garde comics often appear in hip indie comics anthologies such as The Best American Comics and Kramer's Ergot. Following the massive Kramer's Ergot 7, of which Groening was a fellow contributor, Jones was asked to contribute to the upcoming Treehouse of Horror comic book. According to a 2003 Comics Reporter profile, this would not be his first Simpsons comic:

Effective as illustration, Ben Jones' comics demand reading. As noted by several of his fellow cartoonists, on no planet should a comic about Simpsons characters Homer and Moe taking a walk, getting high and skinny dipping ("Ho and Mo") work on any level for a single second, let alone be funny and affecting and a touch profound. In the Alfe stories, Jones' most frequent recurring feature and among the first comics the artist tried to sell through Million Year Picnic, Jones uses a sizable, extremely odd cast to pay tribute to simple pleasures and the way kindness and patience act as buttresses against life's intolerable cruelties. Jones is to the idea of friendship what the cartoonist Jack Jackson is to Texas history, its primary comics chronicler.

Additionally, The Simpsons is a recurring motif in Paper Rad's ouvre, as evidenced by their website.

Yet, despite such egregious acts of copyright infringement, Jones and Paper Rad do not appear to have been punished for their actions. As far as I can tell from a Google search, the art collective has never received a cease & desist letter from Fox's attorneys. In fact, with his contribution to Simpsons Comics, Jones appears to have been rewarded for his copyright infringement!!! He is being endorsed, at least implicitly, by Bongo Comics, Groening, and Fox, who are apparently turning a blind eye to his wholesale appropriation of their intellectual property. Is Jones receiving preferential treatment simply for being a celebrity? Is this really the message Bongo Comics wants to be sending to infringers?

Girl draws an anime version of The Simpsons which gets posted all over the internet, gets a job offer from the comics company that makes Simpsons comics. More people on DeviantArt try anime-izing other Western cartoons in attempt to achieve their own 15 minutes of internet fame. Digg, modest as ever, downplays its role, if any, in parlaying the job offer. [The Star]